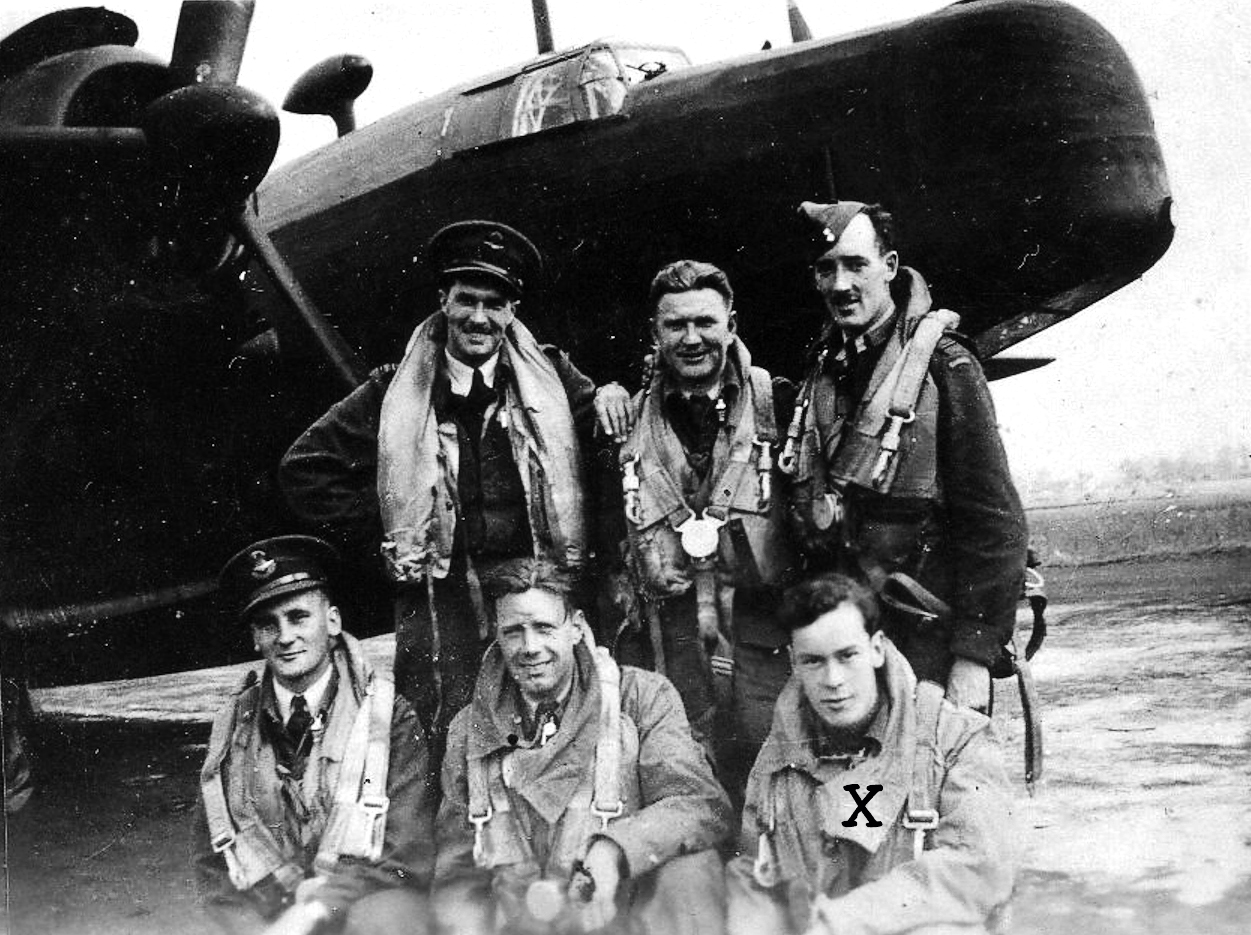 The 19-year-old Canadian pilot Fernand L. Jolicoeur crashed in a Lancaster bomber near Waldenbuch/Germany on January 28, 1945. His descendants are still reeling from the loss of the young man. Where exactly did my great-uncle crash, and what happened back then – these are the questions that the great-nephew of the crash victim Jean-Pierre Gendreau-Hétu has been looking for an answer to these questions for many years. Via detours, the inquiry of the 55-year-old Canadian has now landed with the local historian team of Alt-Waldenbuch, who have undertaken meticulous research. 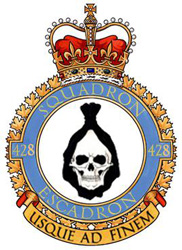 No. 428 Squadron, also known as 428 Bomber Squadron, and 428 Ghost Squadron, was a night bomber squadron of the Royal Canadian Air Force engaged in strategic bombing during World War II. It was based in Teeside, Yorkshire. (Source Wikipedia)
The Lancester K.B. 770 bomber was part of this squadron. 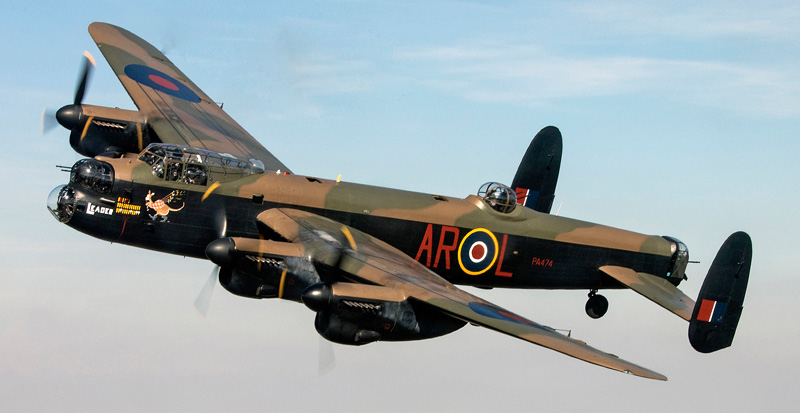 The Avro 683 “Lancaster” (Lanc for short) was a British-produced four-engine bomber of the World War II era. It was the Royal Air Force’s best-known bomber and was used by RAF Bomber Command from March 1942. (Wikipedia) 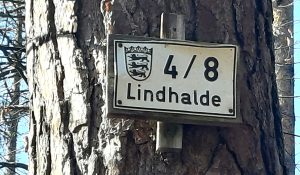 The total casualties were 119 dead, 78 wounded and 5,500 homeless. The weather was bad and the pilots had to fly long detours. There were numerous plane crashes in the process. This was also the case in the Waldenbuch state forest. It must have been dramatic scenes that took place at that time. About a kilometer from the town, in the Lindhalde forest area, the badly hit Lancaster bomber KB 770 NA-D of the Royal Airforce and its British and Canadian crew crashes into the forest with its engines on fire. Five of the seven occupants are recovered dead. Two crew members survive seriously injured.

Searching for the crash site

Unfortunately it was not possible to get usable aerial photos. Possibly the area around Waldenbuch was not militarily interesting enough, so that there are no pictures of the crash site, or the low resolution of the photos does not show anything. 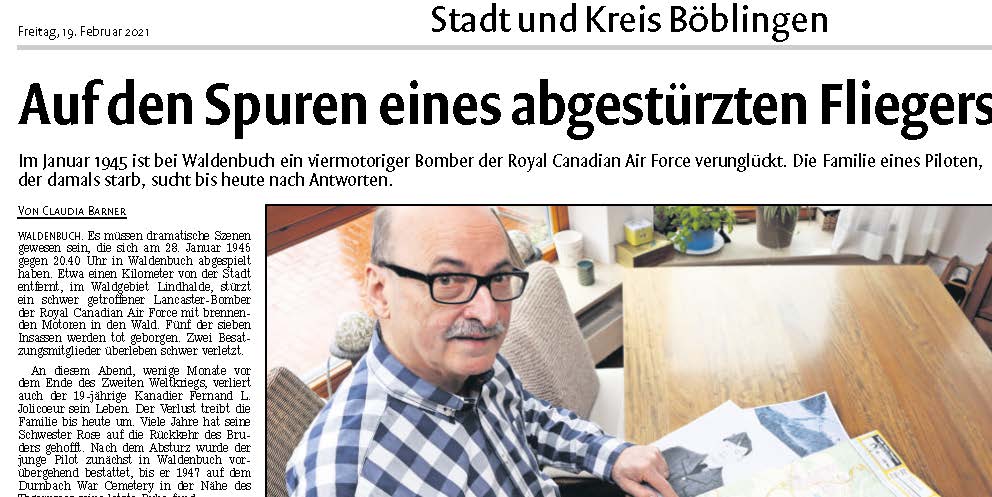 The response to the plane crash in three local newspapers and on the Waldenbuch Facebook group in February 2021 was unexpectedly large. More than 30 eyewitnesses came forward – of which Mrs. Ursula Niebel from Waldenbuch was the oldest at 92..

Here are some important details of these people about the event:

“I was walking with my friends down a little path in the woods towards the crash site and I remember a dead pilot lying there. He was covered with the parachute. I lifted the parachute a little and looked into the face of a very young man. I didn’t go back to the wreckage of the plane.”

As a 9-year-old he was in the night in question together with his family in the vaulted cellar of the neighbor, because air raids were expected constantly. Therefore, we only heard the crash of the plane. It was a loud bang. The crash site is quite close, above our barn. My father and I walked there later. There were only fragments of the plane left,  one engine and various parts. We took screws with us, which were very rare at that time. But unfortunately the screws didn’t fit, because they were in the English inch format.

The plane flew from east to west, very low and slow. It was shot at from all sides. From the German flak, that has been seen. The flak was in Leinfelden and at the edge of the airport. He thought at the time that the plane would not get far. You could see that the plane was struggling.  It was already shot. It flew exactly in the direction of Waldenbuch. But the engines were not burning yet.

We ran from Steinenbronn to Waldenbuch on Monday at noon to the place where the plane crashed. The wreckage was lying with its nose to the road in the direction of Weil im Schönbuch. There were soldiers everywhere. The track caused by the plane could be seen for many years.

Some of the contemporary witnesses report that the crash site was visited by many Waldenbuchers for years to come and that they took many parts lying around with them. It is reported that intact large plastic tanks were later used by farmers as manure barrels. Nothing is known about the salvage of the wreckage of the plane, which took place in the following days by the Wehrmacht. In the local newspapers the crash was probably hushed up for political reasons.

Further a not named Waldenbucher reports that he searched the crash site with a probe around the year 2000 and found something. He reports among other things that the middle part of the Lancaster must have burned, since there were clear traces by soil excavations. The tail section was probably still in order. One found still each quantity splinters. The machine must have lost buoyancy, dropped like a stone, hit the ground on its belly and not slid far. They also found plexiglass from the pilot’s cabin as well as the swivel head, presumably from the lower weapon stand. According to the deceased witness Ernst Kayser the wings must have been intact. They were pulled down the slope to the forest road in February 1945 and taken away. 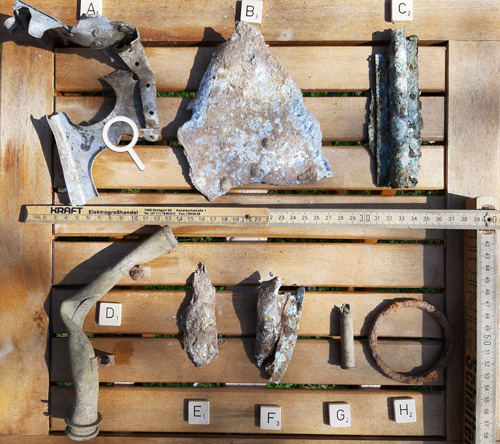 Based on these reports and site visits together with contemporary witnesses in the Lindhalde area, the crash site was finally identified. With the support of helpers, who deal with airplane crashes as a hobby, individual parts were also found, which are assigned by specialists to a Lancaster. The exact coordinates of the crash site are deliberately not mentioned here, in order not to encourage probe tourism.

What was the manning of the Lancaster?

The crew of an Avro Lancaster consisted of seven men. These were in detail the pilot, the navigator, the bombardier, the flight engineer, the radio operator, the cockpit gunner and the tail gunner. Here the crew of the crashed Lancaster K.B. 770. 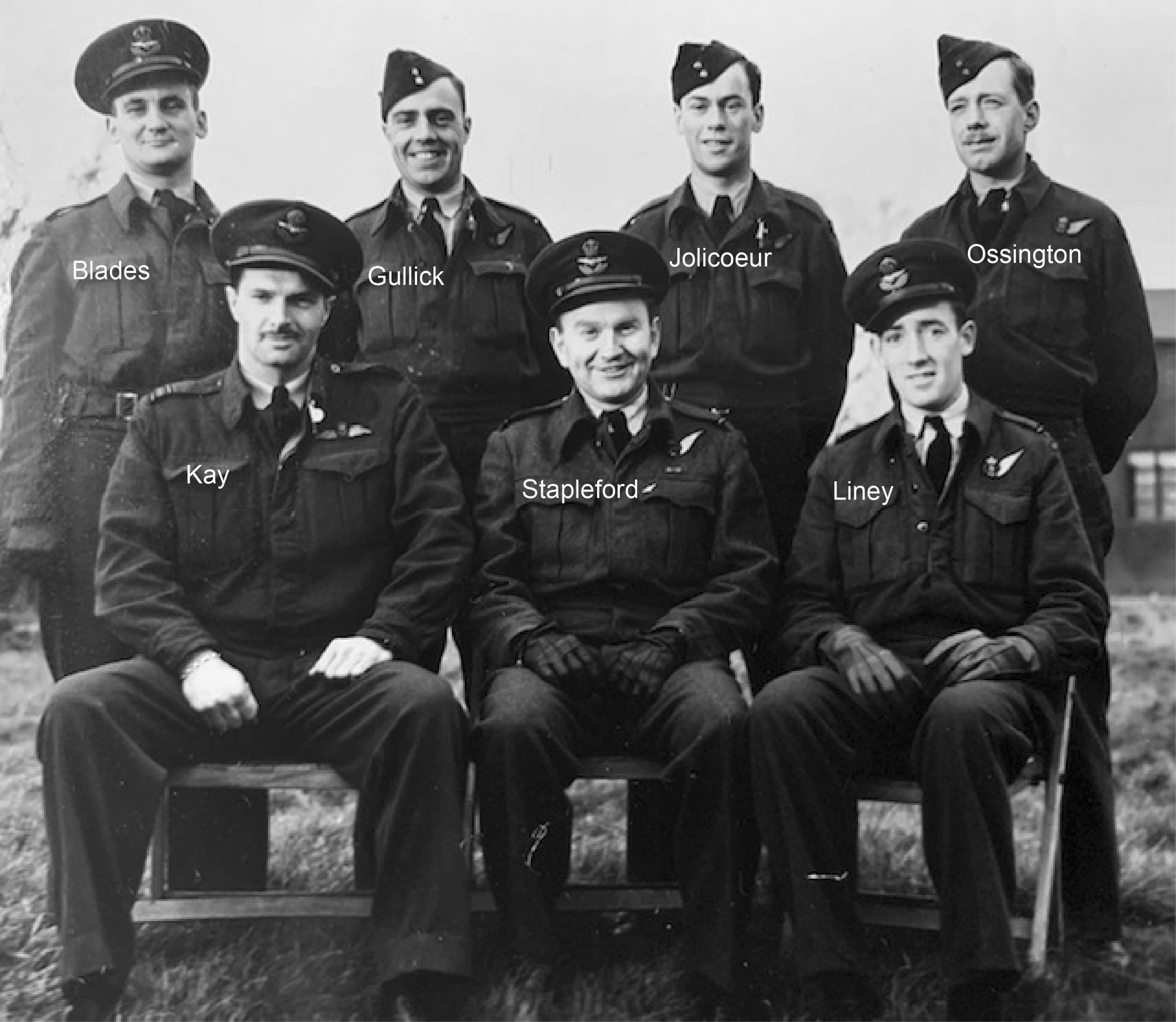 The dead of the Lancaster crew 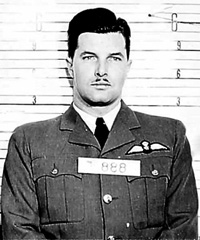 As fate would have it, he was killed on his first mission as a flight commander. 32 years old. 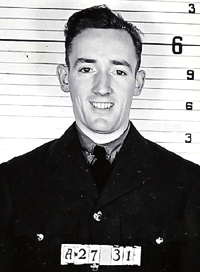 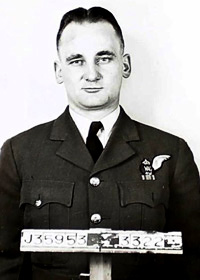 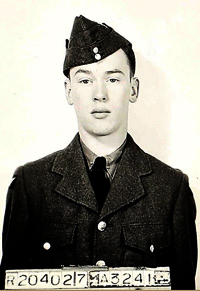 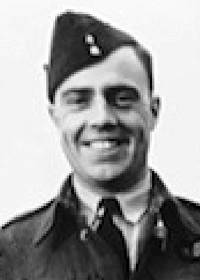 Members of the German Air Force and local police were quickly on the scene at the time, according to British Air Ministry records. The area was cordoned off. After the crash, the dead pilots were first temporarily buried in a communal grave in Waldenbuch until 1947, when they were buried in the Durnbach War Cemetery near Lake Tegernsee they found their final resting place. 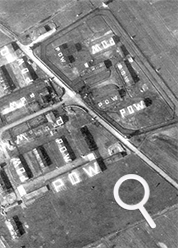 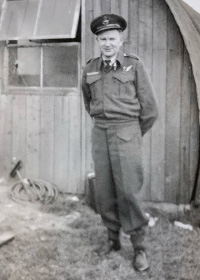 Stapleford, was pulled out of the air stream and landed in a field by parachute. He received first aid by an elderly couple and then taken to the hospital, where he underwent surgery. Injuries were shrapnel wounds to the knee, hand and buttocks. Afterwards he was sent – like all Allied airmen – to the central interrogation camp Dulag-Luft-West in Wetzlar-Klosterwald where he was liberated by US forces in April 1945. Stapleford later gave the circumstances of the crash on record in Britain. According to him, five of the plane’s crew were killed. Also, he would have seen Jolicoeur’s jacket and ring.

Stapleford returned to Canada after the war ended. He married in 1949, had three children, and died in 1990. He was always grateful for the help he received from locals that night. Their willingness to help enabled him to live 45 years after the war. 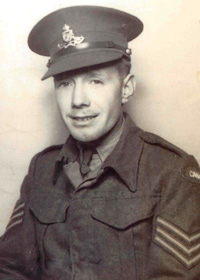 Ossington landed in the Nellingen area, where there was also a military airport at the time, and was admitted to the Esslingen Reserve Hospital to undergo surgery on his left ankle on January 31, 1945. After being a prisoner of war, he returned to Canada and died in 1978 at the age of 60. Rita Ossington, daughter-in-law of Ted’s middle son Bryan, remembers Ted:”Like so many others, he was reminded of his experiences every day by the shrapnel in his legs and how they healed, and by the memories he didn’t share. He told only a few stories about how he was medically discharged from the Army because he was injured and sent home to enlist again in the Air Force. He was actually going to enlist with a buddy, but he had flat feet or something. He couldn’t qualify. The recruiting officer looked at Ted and said, “You should enlist.” When he told him he had been discharged from the Army, he reportedly said, “You don’t need good legs to be a tail gunner.”

For years, Jean-Pierre Gendreau-Hétu has been particularly concerned with the fate of his dead great-uncle Fernand Leo Jolicoeur and has discovered inconsistencies that still leave him in doubt as to whether his great-uncle is actually buried in the common grave in Durnbach. He describes his concerns as follows:

Research in both the local and the Commonwealth registers reveals a gap in the body counts. Waldenbuch death register recorded the temporary burial of four bodies. The 1947 investigation report of an Allied commission also confirms the same number of bodies. However, five bodies were buried in Dürnbach!

The exhumation of the human remains in Waldenbuch and their transfer in 1948 to the central Durnbach War Cemetery, where finally all war victims of the Commonwealth found their final resting place, Here, however, according to the inscription of the common grave suddenly five bodies were buried (See photo above). Where did the fifth body come from?

There seems to be no record of this action, and one has to wonder how German witnesses counted four bodies in 1945 and Commonwealth authorities counted five in 1948? It is impossible to doubt that the four bodies Waldenbuchers buried in 1945 belonged to the crew of Lancaster KB770. Therefore, only individual DNA analysis would provide clarity, although not commonly done by war victims in the Allied armies, once a body is securely in place, even in a collective grave. Jean-Pierre Gendreau-Hétu’s family has already profiled their dead relative’s DNA, should the Commonwealth War Graves Commission one day set out to solve this World War II mystery.

“I just don’t like the idea of going into a common grave,” he explains, “and not being sure that the body that’s in there is the body of my great-uncle.” 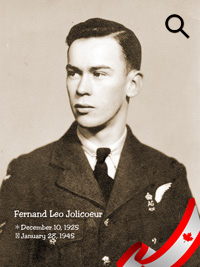 Finally, the research work on this plane crash had been completed with  the help of many people. Six members of the French-Canadian family of Jean-Pierre Gendreau-Hétu came to Waldenbuch to visit the crash site. It was the great-uncle, Fernand L. Jolicoeur, who died in the Waldenbuch forest at the age of 19, together with four of his comrades. The small ceremony took place in a dignified setting at the crash site in the forest. Present were Mayor of Waldenbuch, Michael Lutz, forest district leader Daniel Berner as well as press representatives of the local Filder-Zeitung, Kreiszeitung Böblinger Bote and the US Army newspaper The Stuttgart Citizen. For the reports please click on the newspaper logos.

Here the English translation of the Filder-Zeitung newspaper article.

Inauguration of the memorial plaque on March 17, 2022 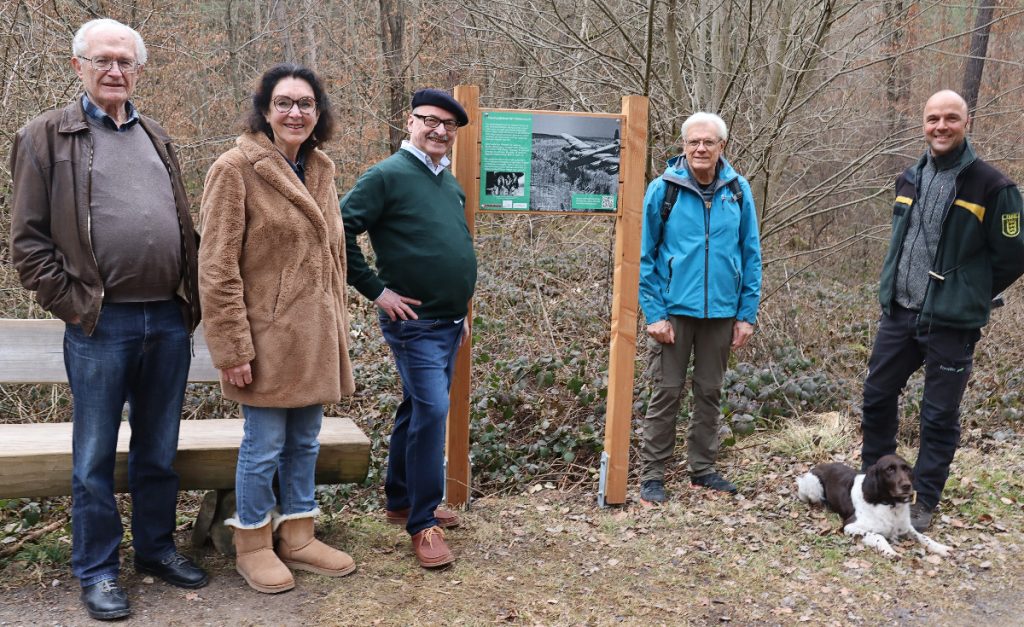 Participants in the dedication of the memorial plaque on March 16, 2022.   (Claudia Barner)

Claudia Barner, reports on the event in FILDER-ZEITUNG of March 17th, 2022:

“The plane crash of a Canadian bomber on January 28, 1945, in the forest near Waldenbuch has has kept the local historian Wolfgang Härtel busy for over a year. With the support of contemporary witnesses and the forestry authorities, he has determined the crash site, contacted relatives and reconstructed the event. The final event on Wednesday was the inauguration of a commemorative plaque financed by the city. The symbol for peace was designed by Härtel’s granddaughter Ann Siri Krause. 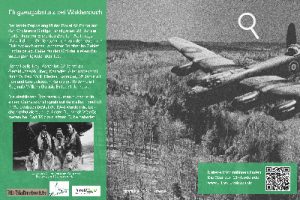 Together with her grandfather, she had to realize in the last weeks how fragile the togetherness in Europe is. “Today, we are all made to realize, that an insane dictator has managed to start a senseless war,” said,” Härtel said. The message of the table is therefore more topical than ever. This plaque focuses on the positive impact of remembrance and brought together Härtel (with hat), the witness of the crash Erich Raith, the city councillor Annette Odendahl, the former forester Günther Schwarz and the forest ranger Daniel Berner. 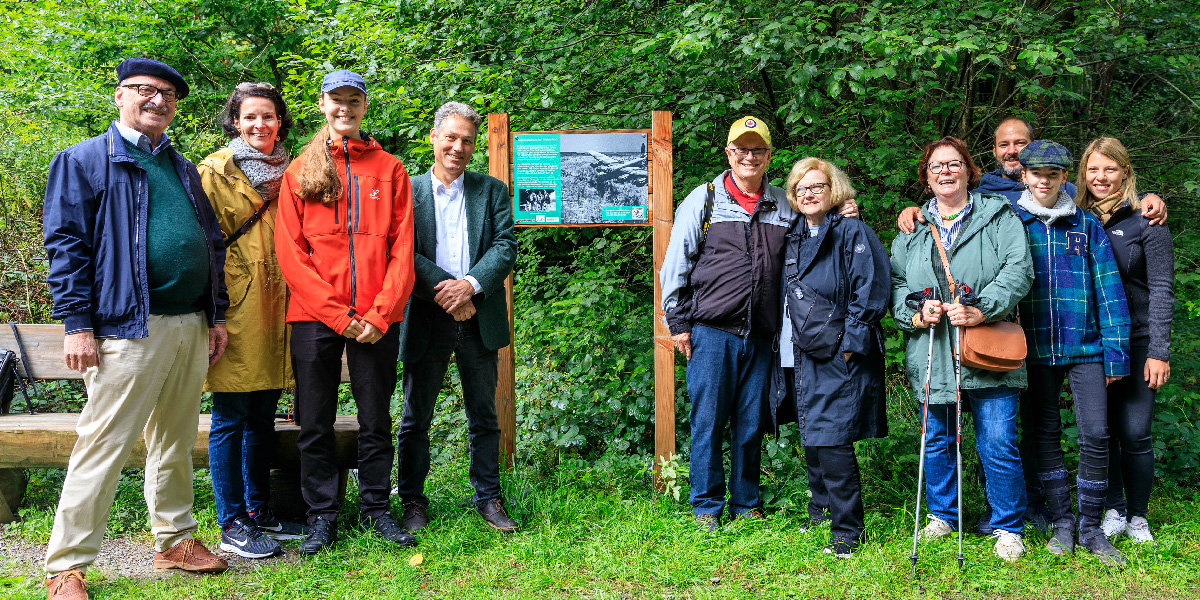 About the meeting of Canadian relatives with family Härtel, reported Eddie Langner of the Böblinger Kreiszeitung-Böblinger Bote on October 12, 2022. To download the translated article please click on the logo.