Headline: Answers to questions about the Lancaster bomber crash in 1945

In January 1945, an Airman of the Royal Canadian Air Force crashed near Waldenbuch. Relatives were now on site and have learned something new about what had happened then. 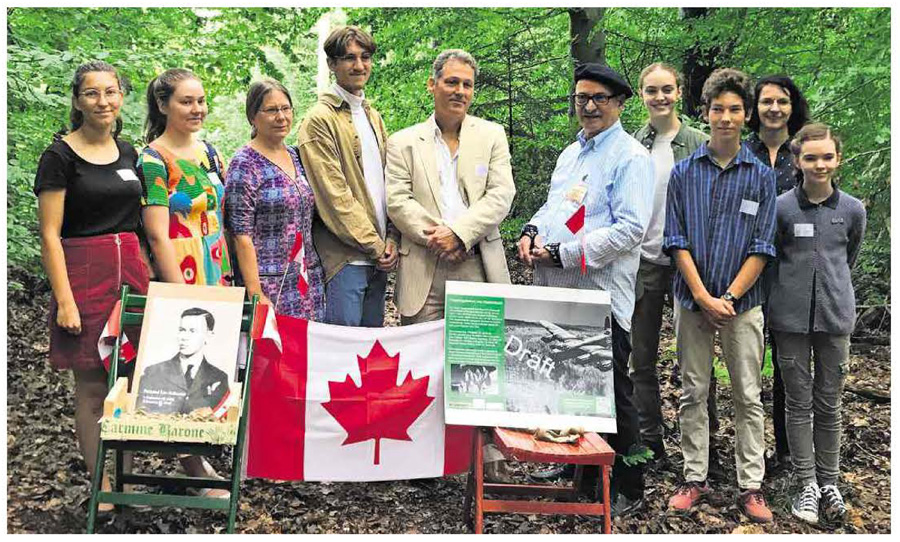 Waldenbuch – Shortly before the end of World War II, in January 1945, a heavy-hitting Lancaster bomber of the Royal Canadian Air Force crashed with a crew of seven over Waldenbuch in the district of Böblingen. Only two pilots survived seriously injured, five of the seven crew members died in the accident. Among them was Fernand L. Jolicoeur, a 19-year-old Canadian at the time. “The memory of Fernand has remained alive in my family for a long time. His death still haunts us today,” says Jolicoeur’s great-nephew, Jean-Pierre Gendreau-Hétu. For years, the 55-year-old Canadian has grappled with the fate of his late great-uncle. He wants to find out what happened back then and where exactly the accident took place. Now his family has finally received answers to questions that have remained unanswered.

The local historian Härtel has researched

Gendreau-Hétu’s inquiry reached Wolfgang Härtel, a local historian from Waldenbuch, in a roundabout way. He took on the task of conducting research and locating the exact crash site. Through his meticulous research and with the help of various reports in the local media, Härtel was able to locate more than 30 eyewitnesses who remember the day of the crash. “Many new details came to light,” reports the 76-year-old local historian. “Even aircraft fragments turned up that could be assigned to a Lancaster.” Based on the witness accounts, as well as the locations where the aircraft parts were found, the accident site was finally identified, Härtel said.
Together with some family members, Gendreau-Hétu traveled to Waldenbuch on Aug. 16 to visit the crash site and pay tribute to the victims. “Today is an important day for my family,” he says. “For years I felt I had to see the site of the accident for myself. Now I can finally do that – it makes Fernand’s death real.” For the small-scale memorial service, pennants of the Canadian flag were stuck into the ground at the crash site to illustrate the outline of the crashed bomber. “We now know roughly how the accident occurred,” Härtel explains. “But there are still many unanswered questions. My research should serve as a basis for the family to find more answers.”

A memorial plaque will still placed near the accident site, however, the exact coordinates of site will deliberately not be made public. “Today should be an opportunity for the family to say goodbye,” Härtel said. “We are leaving the found aircraft parts to the family of Fernand L. Jolicoeur, in memory of their great-uncle.”
The mayor of the city of Waldenbuch, Michael Lutz, was also at the accident site for the memorial service. “If you have a chance to give answers to a family, you should do it,” he says. “Otherwise, their story will eventually be forgotten. Fernand died just before the war ended. He gave his life for peace. Today should also be a day of peace, and a day of remembrance.”